Busted at Andrews Airforce Base

Of all the experiences that I have gone through in my life, this story I am about to tell is perhaps my most daring, certainly my most foolish. Now that I am retired, I have been waiting for the day when I could share this extraordinary event to my fans and friends.

In the last part of the eighties, I took a work assignment from a local Mexican construction firm in Houston, Texas and was hired to manage the inventory of hardware such as nails, power equipment, braces, etc. out of a trailer in Annapolis, Maryland. Also, since I was a board draftsman, I was familiar with drafting and reading blueprints and schematics.

In the early summer of 1988, I left to Maryland as part of a start up crew in a Ford F250. The owner of the company rented a nice apartment for us where I bunked in with four other individuals. We joked around and really had a great time together. The guys also helped me improve my Spanish and I helped them learn English. They also taught me about construction.

On the first day of the job, the slabs for a retirement facility were already set and I helped my friend Roy pop down the chalk lines of the walls that were soon to be built, which took a week to do. As the days went on, all the crews started coming in. The forklift operator brought in the two by fours and roofing materials and placed them near the area where the walls were going up. I would watch all the activity as I doled out the nails and kept an inventory spreadsheet on a brand new IBM computer. After the walls came the sheetrock.

There was so much energy around the building project and I became friends with everyone. We worked from sun up to sun down and were all exhausted by the time we got back to the apartment. I watched my friends from south of the border cook some interesting food, which did not all appeal to me. I often chose a hamburger from Hardees and the local fast food places instead. After work, I would go to the Annapolis wharf and check out the sites. I love history and there was so much of it around me in that historical area.

One morning, while driving the guys to work, we passed a roadkill deer when one of them suggested that we pick up the carcass for a meal. Fresh meat! After work (twelve hours later), they insisted that I stop by the deer then they proceeded to tie it to the trunk since in Mexico, they were used to taking any opportunity to obtain free meat. We drove back to the apartment. In the parking lot, they skinned the deer then cut off choice pieces of meat. They boiled it but the stinky odor was very strong so I napped outside on the patio. One of the guys woke me up to a plate of tortillas, potatoes, and meat. I took one bite and wanted to puke! YUCK!! In turn, they each took a bite from their own plates then ended up throwing the putrid mess away.

Soon, we were constructing the third level and I began assisting the roofers by bringing them 4x8 foot sheets of plywood on my shoulder and back. I would literally run on top of the high trusses that were spread several feet apart and give them to a guy with the nail gun. I was in the best shape of my life! But there was much danger too. If I fell, I would probably have died or broken many bones. Thankfully, I have always had good sense of balance and dexterity even from childhood.

The construction site was huge consisting of about 800 units. Midway through the project, a buddy and I drove back to Houston to pick up more supplies and my car. I had a Pontiac Ventura with a honeycomb grill. (I really loved that car!) I also offered a job to my brother DJ and returned with a supply of a most wonderful herb from Oaxaca for the crew. Because I was the only guy who had a car, I would often take the guys on excursions.

On our trip back to Maryland, my buddy, DJ and I went through Mississippi and passed a KKK bus filled with members of the clan in their finest cloth gowns headed for a meeting somewhere. We sunk real low in our seats as we passed by because, I guess, of all the nervousness and the thought of the clan getting a hold of us and stringing us up from a hangman's tree. We were scared shitless!! I sped onward to get away from them and less than a mile ahead, I had a blowout! I pulled my car to the road side and quickly maneuvered behind some tall bushes. We got out of the car and were ready to run if necessary when they passed by. We sure were relieved when they didn't see us. Afterward, we fixed the flat and continued on to Maryland.

The weeks went by and on Sundays, I would drive some of the guys a few miles away to Washington D.C. where we would explore the Smithsonian, the National Zoo, view the monuments and points of interest. We must have gone to D.C. six different times and still did not see all the museums since there was so much there! On other weekends, I would drive to Baltimore or visit Mount Vernon. 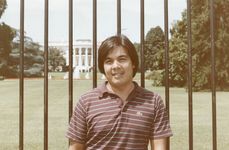 As the end our assignment approached, I drove in to D.C. by myself. I passed Andrews Air Force base and couldn't help but stop and take some pictures. At the time, I had a 1970 Nikon F camera with Nikkor telephoto lenses. It was a beauty of a camera and was big, bulky and could be taken apart at the push of several buttons.

I pulled over and drove next to a hanger and parking lot never noticing a no trespassing sign that was posted there. I proceeded to walk onto the tarmac. Before me stood these huge B1 Bombers and fighter jets. I was in awe! I crouched down taking my pictures when suddenly I saw two soldiers with machine guns and German Shepherd dogs running toward me. I froze. They grabbed me and asked me what the hell I was doing and told me that I was trespassing. They then escorted me into a building and I was interrogated for four hours by the FBI, Secret Service, CIA and others. I felt so stupid. They took my camera away from me and developed the film. I told each and everyone of the men that what I did was the dumbest thing that I have ever done and that I was not a spy!

The feds went through my entire history and called my father, who was a retired lifetime military officer. Since I was embarrassed about the whole predicament, I implored them not to call my dad but they did anyway. He told them that I was foolish and that no, I was not a spy, just an IDIOT. I really didn't realize how serious my situation was. A little later, they escorted me to my car in the parking lot. They already went through my car but one of the officers asked me to reach under the driver's seat and pull out a bag. Uh Oh! I pulled out a plastic baggie and open it up for them to see. Inside, I had stashed two ounces of herb from Oaxaca. It was the most beautiful sinsemilla that you have ever seen...way before today's hydro. Now I was in deep shit!

They immediately took me back inside the interrogation room to drill me about the baggie. If prosecuted, I would have been going to a federal penitentiary in Bugtussle, Mississippi (or somewhere worse) then throw away the key. I really felt ashamed. They finally let me go but said I must return to face a judge to decide my fate.

I returned to work the next day then soon finished the construction job. I returned home to Houston and faced my father. He wasn't very proud of me but he forgave me. I soon returned to Washington D.C. to face trial where a judge read me a long passage then slapped me with a misdemeanor sentence and a year of probation for trespassing. He never did mention the pot! Apparently, the three soldiers who took me to my car split the herb and never reported it!! I was a free man.

I know, some of you who are reading this today are thinking, that this story can't be true but it did happen long ago. I am now older and wiser and have waited for the right time and place to tell my story (especially since the country's marijuana laws are changing). I am no criminal...crazy maybe, stupid yes... but I never hurt anyone but myself. In the end, the feds let me go and told me to never set foot on Andrews Air Force base again. I haven't and never will! Boy did I learn a good lesson there and then.

In reflection, I know I was wrong. I thought that I was invincible and impervious to the law. I have always taken chances good and bad but they are a part of my history and memories. I saw those wonderful B1 bombers and huge fighter jets of the Reagan era and later found out that President Gorbachev was in town to meet with President Reagan...and I photographed his Russian jet!! The authorities never gave my film back but I did have some cool pictures of those incredible planes at Andrews. Now take heed that when you visit a government area and they post a no trespassing sign, I would advise you to not enter. It is not worth it. They had me against a wall taking my picture from every angle and for a split second they could have bashed my brains out with their rifles. I was really scared that day!!! Stupid too. I think the worst part of this incident was facing my father since I let him down. We all make mistakes though...forgive me Dad.

Thanks for reading my true story. I can't wait to share my next amazing story with my fans and friends. Until then, keep the faith and stay out of trouble.